Learn how to toast a bagel in your toaster oven! Enjoy a bagel that’s perfectly toasted on top but still chewy in the middle every time using your toaster oven’s bagel function. No worries if your little oven doesn’t have a special bagel setting, we’ve got an easy hack for you to try.

The humble Bagel function is an easy one to miss.

But trust me, it is LIFE CHANGING.

At least it was for us and I’m hoping it will be for you too.

Life Pre Bagel Function: We’d slice a bagel in half and pop it in the toaster oven to get crisped and golden. After a few minutes, the bagel would be toasty on top but the previously chewy crust was HARD and CRUNCHY.

With a Bagel function, like the one on our Breville and Cuisinart toaster ovens, only the top of the bagel slices are exposed to a high heat. Meaning only the tops brown and toast.

A lower gentle heat is used for the bottom elements. This way the undersides of the bagel are warmed (not toasted) leaving the bagel’s crust chewy. 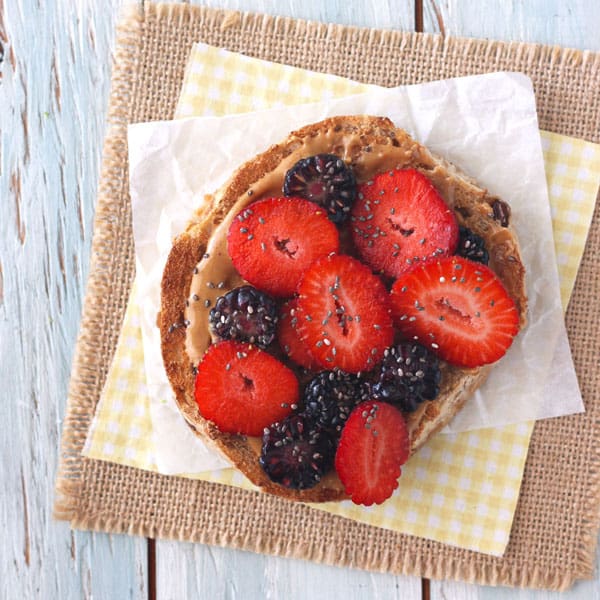 How To Toast A Bagel Using The Bagel Function 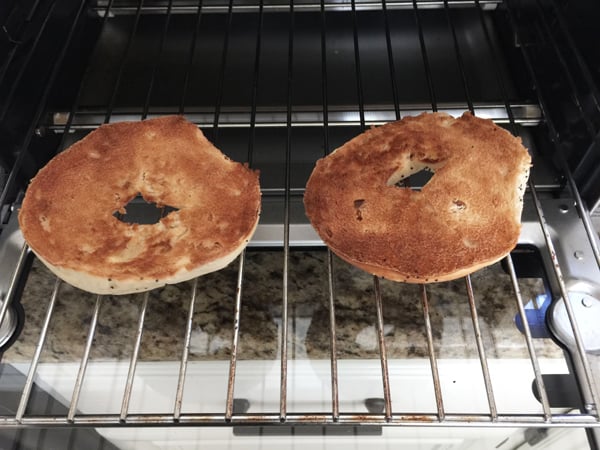 Lighter varieties like onion bagels or those with more sugar like cinnamon raisin bagels sometimes come out toasted a little more than medium. For those, we either reduce the darkness setting or reduce the time by about 20 seconds.

Once you press start on the Breville Smart Oven Pro (BOV845BSS), the area where you selected the number of slices will change to reflect the cooking time. 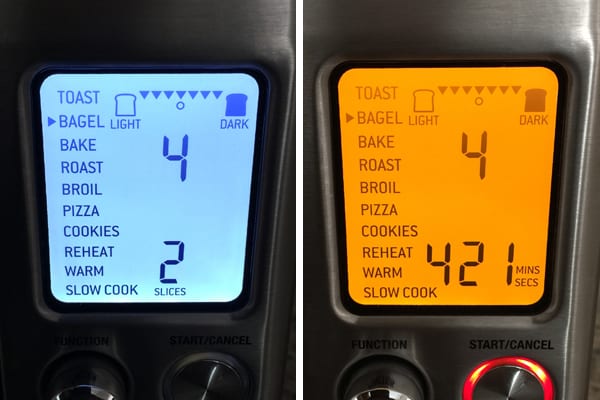 To decrease the amount of time just turn the ‘Time’ knob at the bottom of the machine to the left or to increase the time turn it to the right.

What About Frozen Bagels?

Since bagels are only a weekend thing for us, I usually buy a bag of fresh bagels and toss them in the freezer.

If the bagels are pre-sliced you can stick the frozen slices right into the toaster oven.

A lot of toaster ovens that have a Bagel function also have a way for you to tell the machine if your bagel slices are frozen. 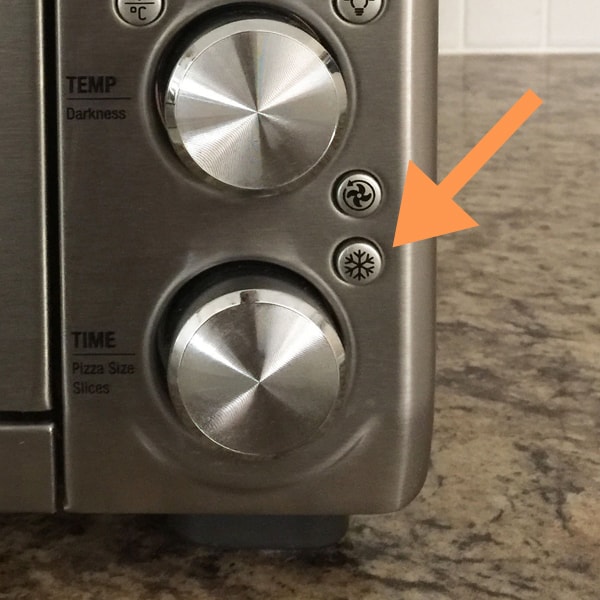 On our Breville, it’s the snowflake button.

After selecting the Bagel setting, level of darkness, and the number of slices you can press the snowflake button. The toaster oven will then automatically increase the time to include defrosting and toasting your bagel. 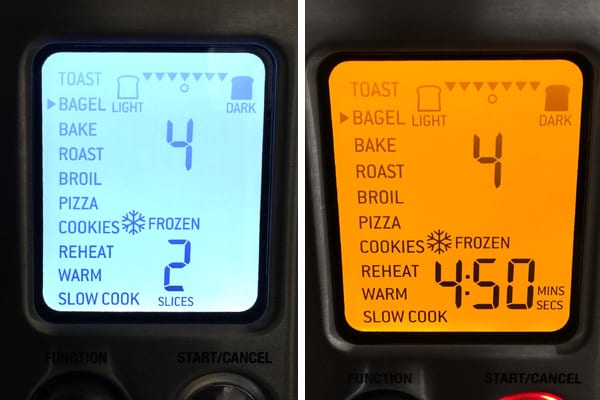 We rarely use the snowflake/frozen button for bagels because the bagels I get from Trader Joe’s are not precut and trying to slice a frozen bagel is a terrible idea. So I either set a bagel on the counter to defrost or zap it in the microwave for 20 seconds before slicing and toasting.

What If My Toaster Oven Doesn’t Have A Bagel Function?

You can use your BROIL setting! 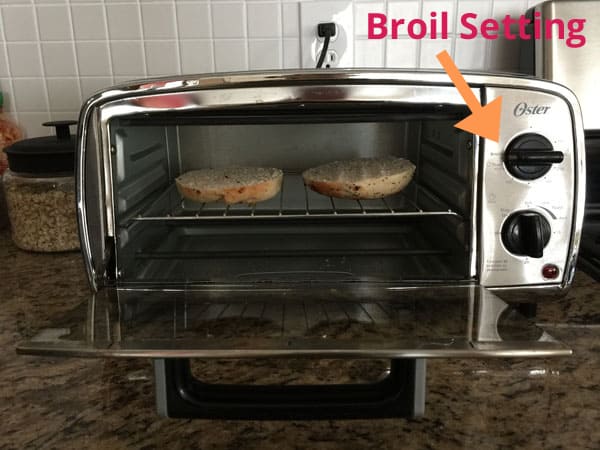 Did you know that the broil setting on your toaster oven only turns on the upper heating elements? That direct high heat is very similar to the heating of a Bagel function.

How To Toast A Bagel Using Your Toaster Oven’s Broiler 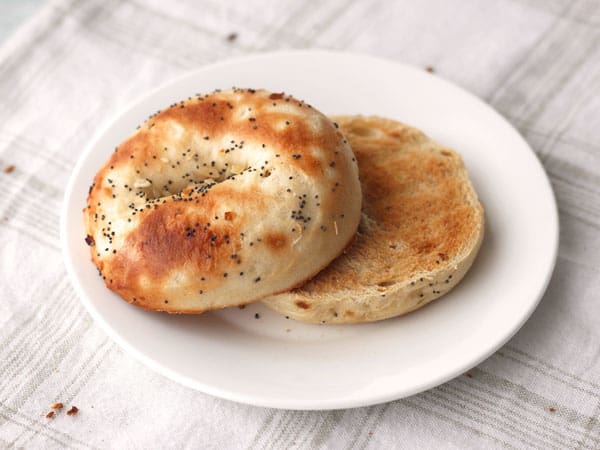 Using our little Oster, with the rack in the bottom position (facing up), it was almost 4 minutes until the tops of our bagel slices were golden.

While the bottoms stayed nice and squishy. 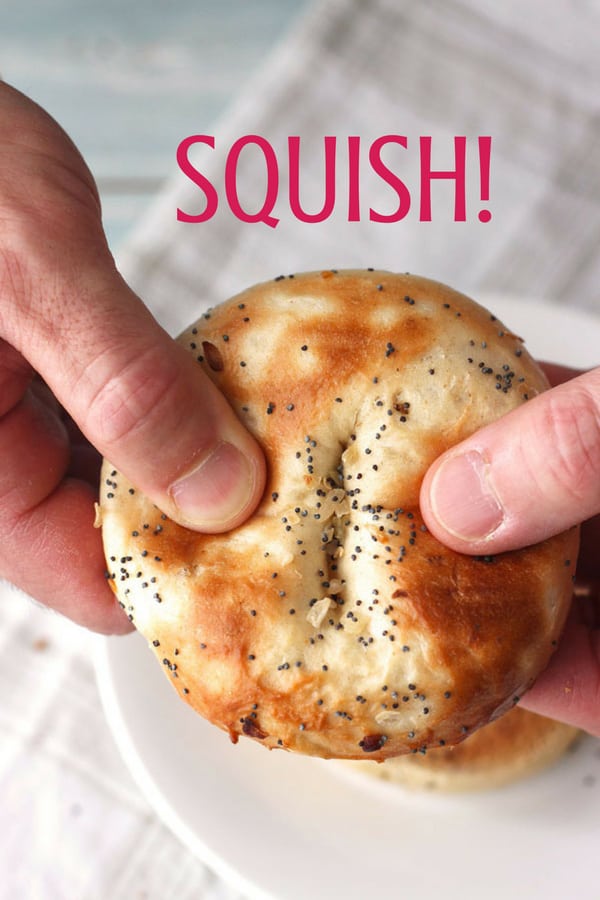 If you prefer the undersides slightly crisped just flip the bagel slices over and broil for 30 to 60 seconds more.

Okay, now that you’ve got your perfectly toasted bagel make sure to check out these 7 Tasty Ways to Top a Bagel. From sweet to savory, there’s a little something for everyone to enjoy.