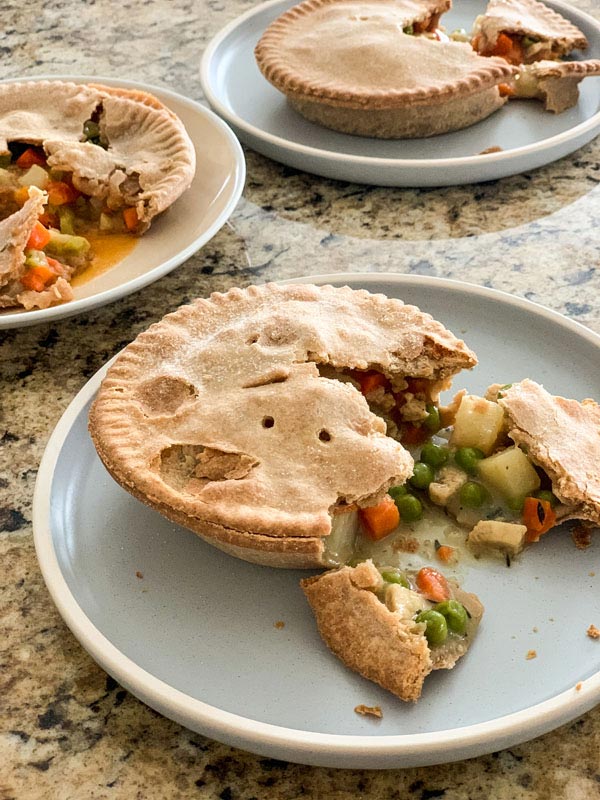 Years ago we showed you how to use a convection toaster oven. Since then, we’ve all been having fun baking up the best cookies, roasting vegetables, and devouring batches of crispy fries.

One of the most popular requests in the comments on that post is for frozen pot pie tips. Since Tim and I don’t eat meat we haven’t had much to offer on the topic.

Well, that was until I ran across Amy’s Vegetable Pot Pies at our grocery store. They’re frozen, vegetarian, and even include toaster oven cooking instructions* on the box!

(*If you’re curious why some frozen foods advise you not to cook them in a toaster oven check out these Frozen Meal Cooking Tips.)

Excitedly, I tossed a bunch in the shopping cart and headed for the checkout. 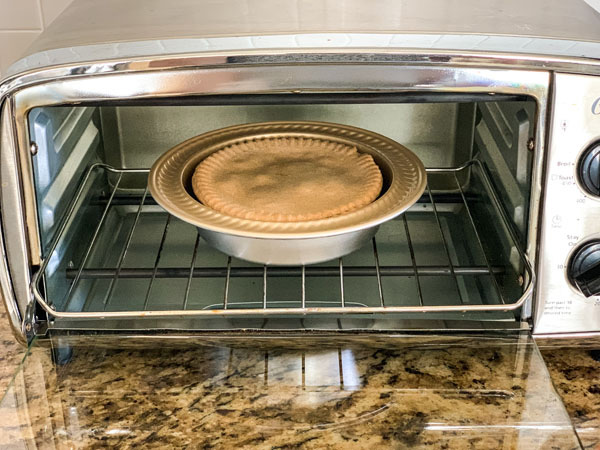 As a ThermoWorks affiliate, we may receive commissions from purchases made using the links on this page.

Armed with 2 toaster ovens and a mini metal pie pan, Tim and I set out to find the best way to cook frozen pot pies in a toaster oven.

We were looking for the method that produced a flaky crispy crust, a saucy filling that flowed smoothly, and (for you Great British Bake Off fans) no soggy bottom! 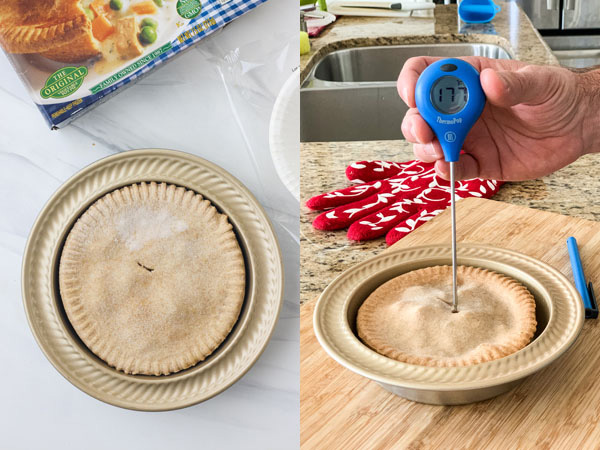 Some cooking methods worked better than others and one was just flat-out gross. Today we’re sharing the good. The messy. And the occasionally inedible results.

Don’t worry, we used our favorite instant-read thermometer to verify all of the pot pies had reached a safe internal temperature before taste-testing them.

Here’s a handy temperature guide in case you need it for your own pot pie adventures.

Okay, let’s get this challenge started! 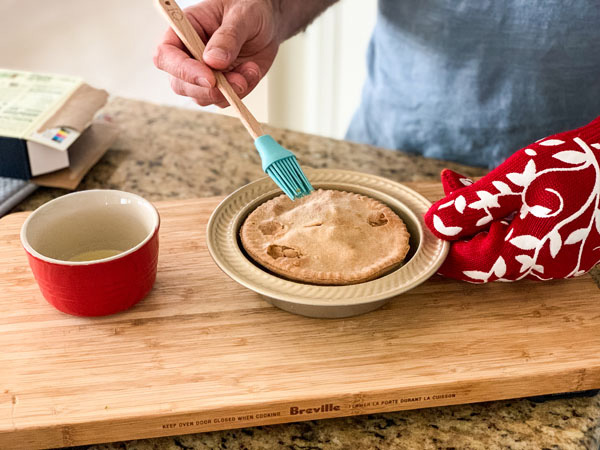 The box directions for toaster oven cooking were as follows:

We also used their directions for glazing the pie by brushing each pie with melted butter or milk and honey after 20 minutes of cooking. FYI: The butter worked best.

On the first day, we tried 3 different cooking methods. 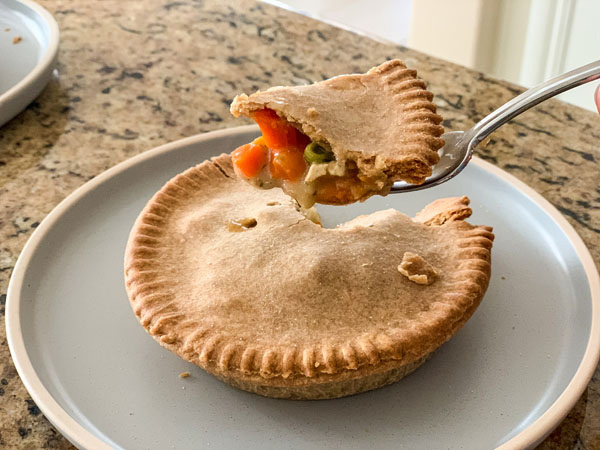 The Results: The top crust was nice and crispy. The bottom crust was dry, not soggy but not very crispy either. The edges where we’d been a little heavy-handed with the butter glaze were super crunchy (in a good way), while the filling was juicy and the vegetables tasted great. The sauce flowed well and covered all of the ingredients. 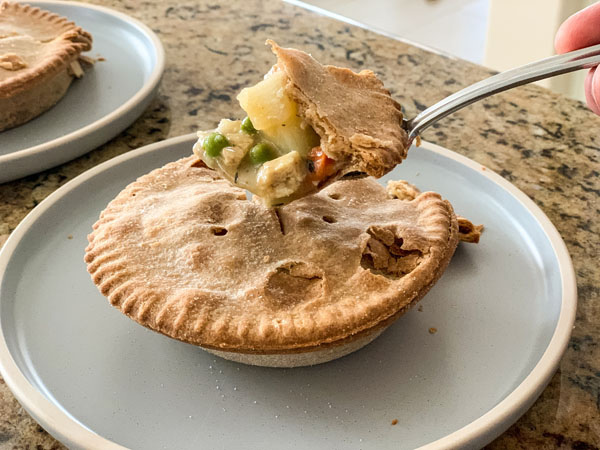 The Results: The top crust was flaky and nicely browned. Both of us liked the crunchy edges. The biggest surprise was the bottom, it was dry and crisped. The creamy sauce was smooth and not too thick while the tofu and vegetables were warm and cooked through but not dry, tough, or mushy. 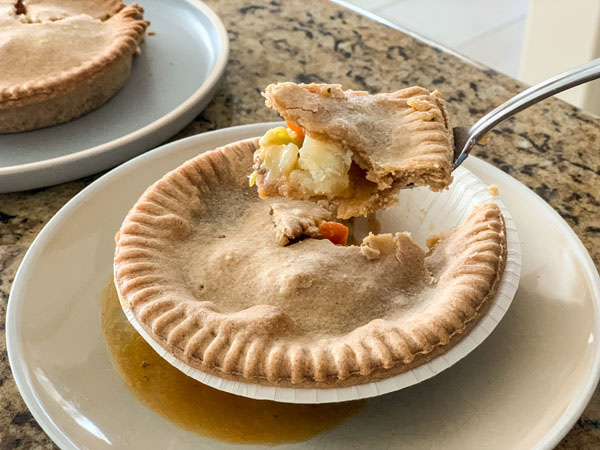 The Results: Terrible. The crust was gummy and chewy while also dry in some parts. The vegetables were very mushy. Some of the sauce spilled out onto the pan, what was left inside the pie was thick.

I think the pictures say it all. 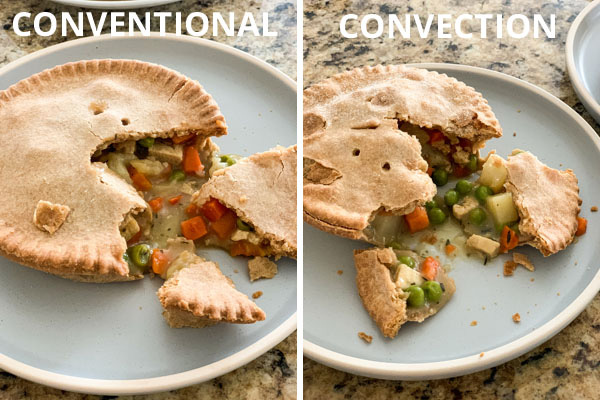 Both pot pie fillings tasted identical. The only noticeable difference was in the crust.

The pie cooked with convection had:

With more pot pies in the freezer, we decided to try a few other ideas using the convection setting.

The secret to cooking with convection is to let the warm air circulate around the food. So we thought the frozen pies might cook even better if we didn’t use the pan and cooked it on a rack instead. 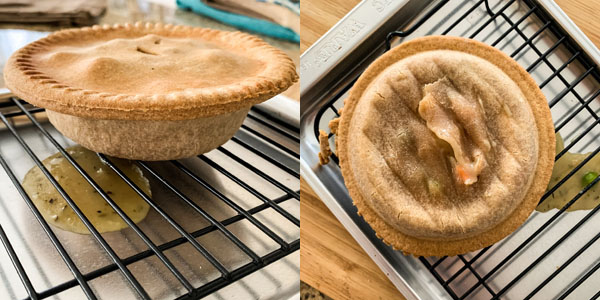 The Results: The crust was looking great but about 2/3 of the way through the cooking time our pie sprung a leak. When I flipped it over, you could see the bottom crust had defrosted and softened during baking. Without the support of a pan, it just fell apart.

Since that was a bust, I wanted to see what would happen if all you had to cook the pot pie with was a small baking sheet. 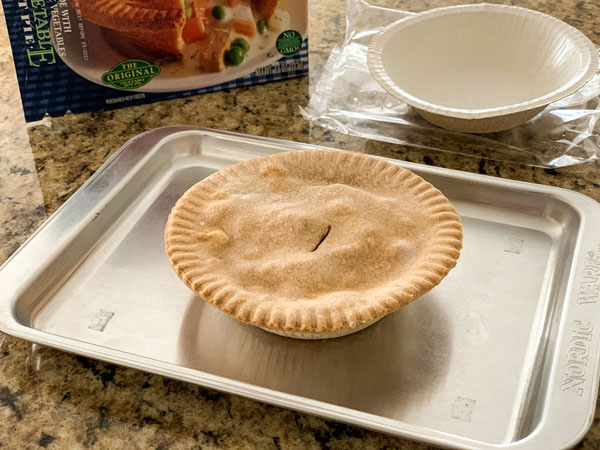 The Results: Because the pie was directly on the pan it cooked faster than any of the other pies (well, except the gross microwave one). After the rack collapse, I was a little worried the pie might leak or fall apart but it stayed intact just fine. The top crust and filling looked and tasted like the one cooked in the pie pan. The only noticeable difference was the bottom which was nicely browned. 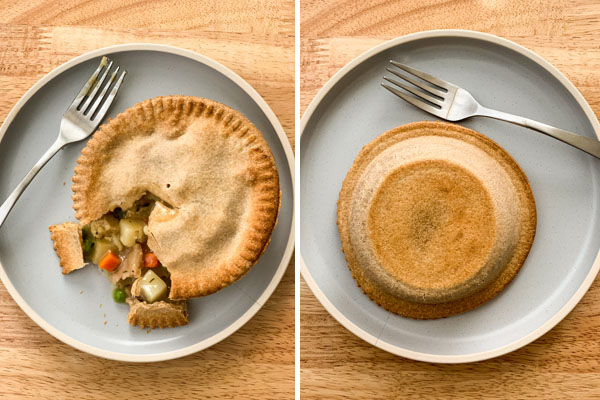 This ended up being our favorite pot pie out of the 5. I’m not sure this would work for every kind of frozen personal pot pie but I’d definitely try it again.